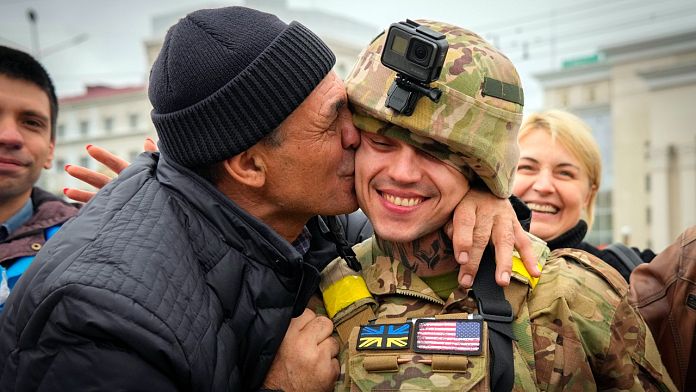 Ukrainian President Volodymyr Zelenskiy has accused Russian soldiers of committing war crimes and killing civilians in Kherson, parts of which were retaken by Ukraine’s military last week after Russia pulled out.

“Investigators have already documented more than 400 Russian war crimes and the bodies of civilians and soldiers have been found,” Zelenskyy said in his late-night video on Sunday.

“The Russian army left behind the same savagery that it did in other regions of the country it entered,” he continued. “We will find and bring to justice all the killers. Without a doubt.”

His claims have not been independently verified. Russia denies that its troops intentionally target civilians.

Ukrainian troops arrived in the center of the southern Kherson region on Friday after Russia abandoned the only regional capital it had captured since Moscow launched its invasion.

The Southern Command of the Armed Forces of Ukraine said on Monday that Russian forces continued to “inflict fire damage to our troops and unoccupied settlements along the right bank of the Dnipro.”

The governor of Kherson region, Yaroslav Yanushevych, said the authorities decided to maintain the curfew from 5pm to 8am and ban people from leaving or entering the city as a security measure.

“The enemy has undermined all critical infrastructure,” Yanushevych told Ukrainian TV. “We’re trying to get together in a few days and (then) open up the city,” he said.

In an online post, Yanushevych warned people about reports of humanitarian aid arriving in Kherson’s Freedom Square and urged people to stay away from the city center as demining operations were expected to continue there.

Zelenskyy also warned residents of Kherson about the presence of Russian mines. “I ask you please not to forget that the situation in the Kherson region remains very dangerous,” he said.

On Sunday, artillery exchanges that echoed over Kherson failed to discourage crowds of jubilant, flag-waving residents huddled against the cold from gathering in the city’s main square.

A day earlier, villagers with flowers waited on the road to Kherson to greet Ukrainian soldiers as they entered to secure control of the right bank of the Dnipro River.

The reconquest of Kherson represents Moscow’s third major withdrawal of the war and the first that involves surrendering such a large occupied city to an important Ukrainian counter-offensive.

Mass graves have been found in several locations across Ukraine since the invasion began in February, including civilian bodies showing evidence of torture discovered in the Kharkiv region and in Bucha, near Kiev. Ukraine has accused Russian troops of committing the crimes.

A United Nations commission in October said war crimes were being committed in Ukraine and that Russian forces were responsible for the “vast majority” of human rights violations in the first weeks of the war.