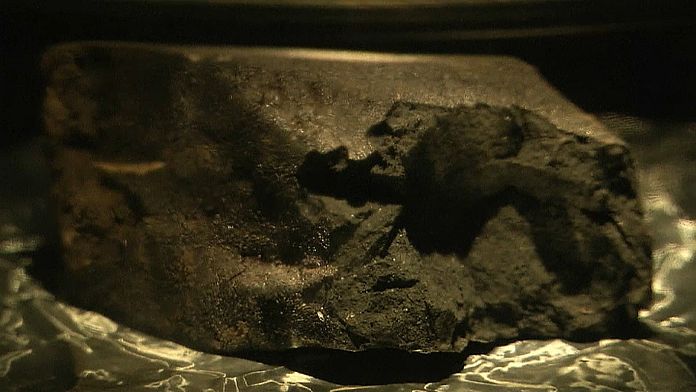 A 4.5-billion-year-old fragment of debris that was flung to Earth from the outer reaches of our solar system has gone on display at London’s Natural History Museum.

Named the Winchcombe meteorite after the small English market town where it crashed in February, scientists say this type of meteorite is incredibly rare.

Its arrival on February 28 was captured by Richard Fleet of the UK Meteor Observation Network before it landed on Hannah Wilcock’s driveway in Winchcombe.

“It was the max block, so I wasn’t really doing anything that night, oddly enough,” Wilcock told reporters. “And I heard something smash outside. I had my window open, as I often do at night, and lo and behold, it wasn’t a meteorite.”

The piece of space debris of a type known as carbonaceous chondrite, some of which contains organics and amino acids – the essential ingredients for life.

Helena Bates, Acting Curator of Meteorites at the Natural History Museum, said: “It is made up of things like minerals that contain water, which suggests that at some point in its history it was exposed to water.

“Wherever we find water on Earth, we find life. So water in our solar system is something we’re very interested in. This meteorite may answer some questions about the origin of water.”

London’s Natural History Museum reopens its doors on Monday after around five months of closure due to coronavirus restrictions.

It is the longest closure in the Museum’s history since the Second World War, and Monday will be the first time the public will see the Winchcombe meteorite.