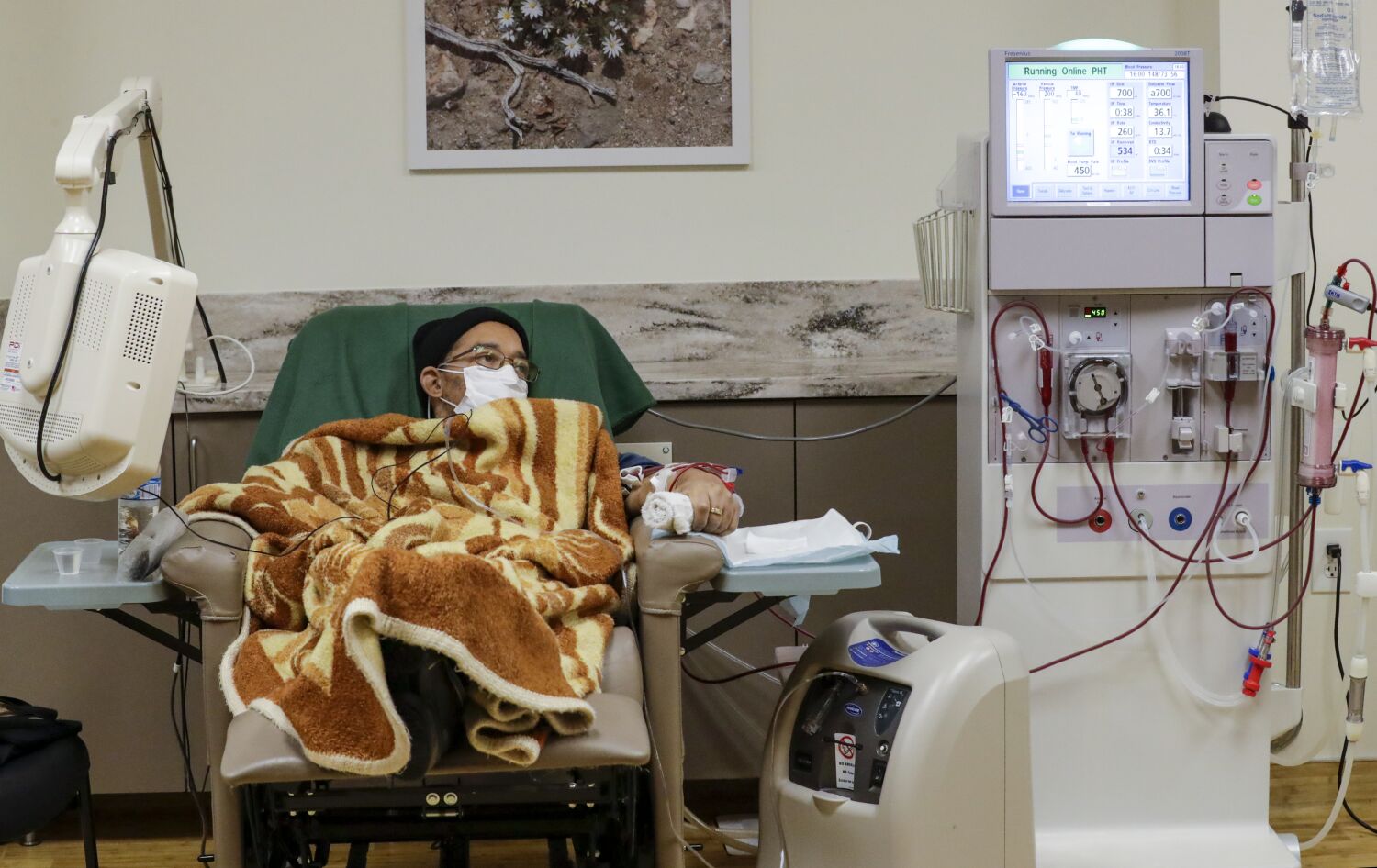 A good rule of thumb for assessing the value of a business is to look at how much its owners will spend to protect it from regulations. Measured this way, the dialysis business is really valuable.

We can determine from the money spent by two of the leading companies in the field to defeat Proposition 29 in next month’s election.

The companies are Denver-based DaVita and German company Fresenius Medical Care, which together own about 75 percent of the 650 licensed dialysis clinics in California.

The medical evidence has been completely overwhelmed by the profit drive.

They have contributed about $80 million of the $86 million raised against Proposition 29 to date; a third, much smaller company, US Renal Care, has contributed nearly all of the rest.

The measures are very similar to Proposition 29; all three were put on the ballot by the Service Employees International Union, which has been trying to unionize dialysis workers. DaVita and Fresenius accounted for about 92 percent of spending opposed to these measures during those years.

Proposition 29 would require every dialysis clinic to have at least one health care professional — a doctor, nurse practitioner or physician assistant — on-site during treatment. It will require clinics to report infection-related data to state authorities, disclose their owners and obtain consent from the state Department of Public Health before closing or reducing services. Violations can result in damages of up to $100,000 per violation.

A potential problem addressed by Proposition 29 (and its earlier versions) is that treatment at for-profit clinics (such as those owned or operated by DaVita and Fresenius) is subject to the profit motive.

“If we pay attention to the evidence, there are major policy changes to address the life-or-death situations faced by thousands of patients each year,” said Samuel Dickman, co-author of the 2020 survey. The annual mortality rate for patients was 7 percent higher than for patients at nonprofit institutions.

“The medical evidence is completely overwhelmed by the profit drive,” Dickman said.

DaVita and Fresenius referred my request for comment to the 29th Movement, which said the staffing task was unnecessary and so costly that if passed, hundreds of clinics would be shut down. forced to close. (That’s according to a study commissioned by the dialysis company Berkeley Research Group, an employment research firm.)

Given that the campaign’s TV commercials suggest that so many dialysis clinics are on the brink of bankruptcy and that the initiative will deprive thousands of kidney patients of access to this life-saving procedure, you may be wondering how these companies can afford the veto on the 29th Activity. Simple: it costs them a fraction of their profit.

Fresenius’ revenue in North America last year was $12.2 billion, with a profit of about $1.66 billion, or a profit margin of 13.6%; in the previous year, its profit accounted for about 17% of North American sales.

According to DaVita’s most recent proxy statement, DaVita has another big conglomerate that it may be able to pick in a pinch: Billionaire Warren Buffett owns 38% of the company through his Berkshire Hathaway conglomerate.

For years, DaVita-Fresenius’ duopoly in outpatient dialysis has caught the attention of healthcare professionals. Before looking at how it affects patient health, let’s take a look at how it arises.

As I have previously reported, aside from kidney transplantation, dialysis is the only life-saving option for patients with end-stage renal disease. This is a condition where the kidneys have shut down, usually because of diabetes or chronic high blood pressure. Patients must undergo dialysis, in which their blood is circulated through a filter to remove waste, several times a week for hours at a time.

Dialysis is so expensive—up to $150,000 per patient per year—that patients couldn’t get insurance before the Affordable Care Act. As a result, Congress in 1973 allowed people with kidney disease to enroll in Medicare at any age. This effectively makes end-stage renal disease the only disease in the United States that is subject to a single-payer plan. (Some are also covered by Medicaid.)

Combined with a rapid increase in diabetes, high blood pressure and other underlying conditions, the federal program has turned dialysis into a lucrative business. Covered approximately 10,000 patients in 1973; today, more than 470,000. Federal spending has soared from $1.1 billion (in current dollars) in 1973 to about $51 billion a year in 2019.

DaVita and Fresenius have been big beneficiaries of these trends. The Affordable Care Act has been a boon for these companies because it prohibits private insurers in the individual market from denying dialysis patients.

Insurers and shareholders were quick to file allegations that dialysis companies were “steering” patients away from Medicare and persuading them to sign up for private health plans. (The companies deny this.) DaVita settled a shareholder lawsuit for $135 million in 2020 over the alleged scheme, but did not plead guilty.

Doubts center on the American Kidney Foundation, which describes itself as a charity that helps kidney patients pay for private insurance premiums and other treatment-related costs. Judging by its financial disclosures, however, the fund resembles an offshoot of DaVita and Fresenius, which have contributed more than 80% of annual revenue in recent years.

Lawmakers and health care experts find the relationship troubling because the fund’s premium assistance arguably makes it easier for patients to drop health insurance and enroll in private health plans.

Fund tracking is interesting, to say the least: DaVita and Fresenius are major financial backers of a charity that helps patients sign up for insurance, putting more money in the company’s pocket. The fund said it would not direct patients to any specific insurance coverage.

Guiding allegations are troubling because private insurance plans are the wrong choice for many patients, in part because the American Kidney Foundation cut premium assistance to patients soon after they received a kidney transplant. This could make health insurance unaffordable for patients, a key issue for transplant patients.

“It is horrific that this affects the nation’s most underserved patients the most, further exacerbating the already existing kidney transplant disparity in the country, and it’s a public health crisis,” Teri Browne, a social worker, formerly DaVita and Fresenius employees told Centers for Medicare and Medicaid Services at a 2016 hearing.

The issue has led to a separate regulatory effort in California. This is AB 290, a law signed by the governor. Gavin Newsom in 2019. The measure prohibits dialysis clinics from directing patients to any particular type of insurance and limits Medicare rates for any patient who receives third-party financial assistance, such as that provided by the American Kidney Foundation.

The fund sought to force Newsom to veto the bill by telling its grantees that it would withdraw from the state if he signed it. He didn’t waver. After he signed, the fund and others filed a lawsuit. A federal judge blocked the law in December 2019. The case is still pending.

This brings us to the question of the quality of treatment provided by the for-profit dialysis industry.

A 2019 study attributed the lower chances of patients receiving a transplant at for-profit clinics to factors such as less time spent with patients by nephrologists at these clinics and fewer consultations about transplants—despite federal regulations All dialysis facilities are required to ‘offer transplant services’ to educate and assist interested patients with kidney transplants,” the study said.

Another study, in which researchers at Brigham Young University and Duke University tracked the acquisition of 1,200 independent clinics by major chains over a 12-year period through 2010, found a dramatic increase in the use of erythropoietin, an anti-anemia drug with High Medicare access to clinics, higher reimbursement rates, but greater health hazards.

Large chain acquirers also replaced high-skilled nurses with low-skilled technicians, the study found. The paper reported an 11.7% increase in patient burden per employee and a 4.5% increase in the number of patients treated at each site, “stressing resources and potentially reducing the quality of care.”

Patients who received a clinic were 4.2% more likely to be hospitalized in any given month and “8.5% less likely to receive a kidney transplant or be added to a transplant waiting list during their first year of dialysis”.

DaVita and Fresenius would like you to think that Proposition 29 is nothing more than an attempt by the SEIU to “blackmail” these companies into agreeing to unionize. It’s a smokescreen that obscures issues involving the quality of care for kidney patients who dominate the company’s unimpeded foray into this highly lucrative therapeutic area.

Medical research has shown that having more and better-trained employees, including unionized employees, results in better patient outcomes in facilities such as nursing homes. Is there any reason to think the same won’t happen in dialysis clinics?

As DaVita and Fresenius become more dominant, they will have more power to determine the level of care their patients receive. The profit motive will only get stronger, and the only force holding it back will be the voters at the ballot box.